Report on Supervisor Gore’s presentation to the Windsor Democratic Club

May 21st meeting of the Windsor Democratic Club 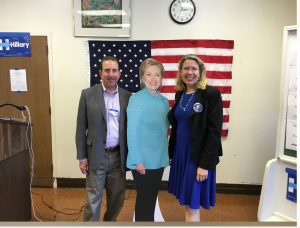 On Sunday, two Democrats from Windsor were in San Rafael, trying to be elected as Clinton delegates for the 2nd Congressional District, which includes Windsor, and is represented in Congress by Jared Huffman. The two from Windsor – Julia Donoho and Albert G. Handelman – are shown here with a full-sized cardboard cutout of Hillary Clinton.

As of mid-day on May 3rd, there had been no announcement of who was elected as potential delegates. (The exact number of Clinton delegates from the 2nd District will depend on what voters do on June 7th.) This post will be updated once that information is published.

(As Barry Hirsch – a 2012 delegate to the Democratic National Convention – noted at the WDC meeting last Thursday, delegates pay their own way to the convention. Also, Philadelphia in July?)