Deb Fudge To Speak at the August 25th meeting 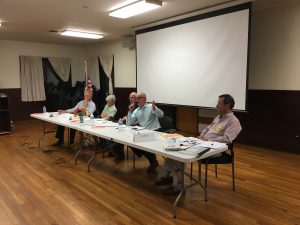 On July 28th, the Windsor/North County Democratic Club sponsored a community forum on Healdsburg’s November ballot measure to amend the current Growth Management Ordinance. More than one hundred people attended the forum, held at the Villa Chanticleer Annex in Healdsburg.

The Growth Management Ordinance that is now in place limits on the construction of dwelling units to a three-year average of thirty per year. The ballot measure would fundamentally change current regulations, substituting provisions from the Housing Action Plan that was developed by the city’s Community Housing Committee, which began work in July, 2015. The Housing Action Plan provides a more flexible approach, which attempts to respond to market conditions. The amended measure favors the construction of multi-family dwellings, with the goal of providing increased housing opportunities for low and middle income residents.

The purpose of the club in staging this event was to provide information to Healdsburg residents who will vote on this complex issue in November. Four long-time Healdsburg residents served as panelists at the forum: Gail Jonas, a retired attorney and a fifty-year advocate for maintaining the small town character of Healdsburg; Jim Winston, the author of the existing Growth Management Ordinance, which was overwhelmingly passed by voters in 2000; Tom Chambers, a three-term Healdsburg city councilman and current mayor and member of the Community Housing Committee; and Jim Brush, a retired public accountant and president and CEO of Summit State Bank. Ms. Jonas and Mr. Winston spoke in favor of retaining the current GMO; Mr. Brush and Mayor Chambers made the case for a yes vote on the ballot measure.

The proponents for the ballot measure contended that it would make housing more affordable for a broader economic spectrum and reverse the trend that has made Healdsburg housing prices affordable to only the wealthy. The panelists opposed to the measure argued that these changes would do little to provide affordable housing and would only increase the housing inventory available to the wealthiest, while exacerbating the problems associated with an enlarged population, including parking.

Californians are being asked this year to not only cast a vote for candidates for various offices, but are also voting on a long list of state propositions and county and local ballot measures. For someone to be more than a low-information voter, study is required. This Windsor/North County Democratic Club event gave those in attendance much detailed information from an expert panel about November’s vote on changing the Healdsburg’s Growth Management Ordinance. 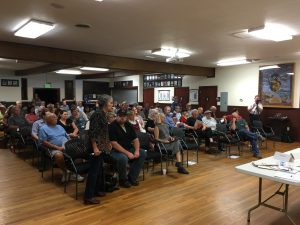